The Art of Dancing in the Moment (Plus, the ‘Before Trilogy’ Wrap-Up) 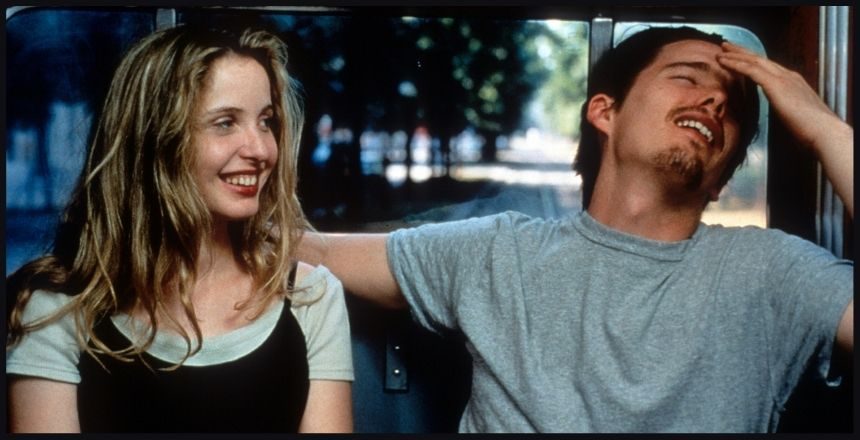 What a call last night! Long and engaging. But when discussing a masterpiece, there’s always more to explore.

Here’s the link to the recording (members only).

What difference would it make for you, if you could dance in the moment like Jesse and Céline? Sure, he’s not the most masculine role model, but he nails the Amorati principles—in abundance!

Blurting with Pressure; Blurting Without

There’s something about a countdown that speeds romance up. Put an end-date to an affair, and watch the love get compressed. Robert Boyle said that the pressure of a gas increases as you restrict the volume in which it can travel. That’s particle physics. In romance, time compresses the rush of love to the point of visceral tension: when our feelings get compressed, we can only blurt them out.

You see this best in the second film. Jesse doesn’t want to leave her: his instinctual body wants to prolong the day with Céline further (possibly forever). They walk through the Parisian park (the conversation, and their egos, on solid footing), they jump on a boat and continue via river (faster now, more fluid), and, then, they enter the back of a taxi together (control of their direction now in the hands of another), where, in desperation, they succumb to their deep-held emotion, all masks fall off, and truths are laid bare. For me, the taxi-in-Paris scene is the best of the whole trilogy: the greatest example of showing up right down to the raw, beating heart, with all its anguish and disappointment. He tells her his dreams—how he wakes up each morning in grief of his longing for her—revealing just how much a part of his psyche she has become.

Seduction is one thing, but love requires a couple of moments this raw if you want it to truly ignite. Against all taboos and ‘sage guidance’, I’ve certainly told women the contents of my dreams. Ignite relationships, that certainly did.

If you leave your romantic life to Boyle’s Law, though, you’ll be forever on the road seeking intensity, and unable to settle in place. We need a skillset that lets us blurt, lets us create magic whenever and always.

One night, back when I lived in the States, I was at a nightclub with an Amorati client—he was doing a coaching weekend with me. I asked him if he was happy with what we’d done together. He said he understood it all from me, but would like an example of Masculine Edge. There was a clock on the wall. With ten minutes before closing time I thought ‘this is getting a little stretched’. I was there on his dime, though, so I looked to see what I could do. A girl leaned, alone, close to the bathroom.

“I’m curious,” I came close and whispered to her. My gaze trailing from her ear down to her thighs.

“Curious about what?” she replied.

“Curious if you’re coming home with me tonight.”

There was a flutter of eyelids, and a kind of writhing that moved down through her body. Did she lick her lips? I only remember in analogue, not HD.

Then, I walked off. We batted glances at each other from across the room.

“What did you say?” my client engaged me, his own breath quickened by the scene.

So the music stopped and the lights came on. A hundred-plus people coalesced toward the stairwell, and stood just before the exit, this girl waited for me.

“I won’t come home with you tonight, but I will see you in the week. Choose a day, place and time and I’ll come.”

And with that she gave me her number. Such is ‘Masculine Edge’.

This isn’t what I cherish about the story, though. As we discussed on the Studio, listening is everything. It’s also useful to introduce little games into your dates, opportunities to ‘go meta’ and talk to her about the connection, as your connection unfolds. We see this with Céline and Jesse—the telephone game—in that late-night Viennese café.

So this girl-from-the-bar and I met during the week, late afternoon, in a downtown café. The sky was clear and it was summer. We talked, flirted, full-steam, and, all of a sudden, perhaps because I asked, she told me something about the art supplies she had with her, and showed me something she was working on, and as she told me the story behind it, which had something to do with her grandmother, I felt a certain tenderness, and it touched me. What is it that happens, exactly, when we are touched by another? A depth of presence—something that changes our neurobiology—fires within us a conglomeration of hormones?

I looked straight at this young woman, on this leafy Colorado afternoon, the time slowing down.

“I know you and I have been playing this whole game of seduction thing until now, this sparring, this banter, back-and-forth. But, leaving all that to one side, what you just said truly touched me. That was beautiful to me. I’m moved.”

Her face just relaxed, and—I don’t know how to describe it—this blooming came over her. She gave a deep sigh: her whole chest rose and released. Everything became softer. The breeze, so cool and so light.

This was the first time I was aware that I had consciously fashioned an arrow, and shot it straight into a woman’s heart. By stating the nature of our conversation, I lifted the lid of the pretense we were wrapped up in, and opened the chance for something deeper. I was curious about the art she was carrying, and she was generous enough to share it. Stating how I was touched by it all, a sense of human-ness came through.

That might have been the start of a Before Sunrise moment. But, for whatever reason, life parted, and that was it.

Eighteen years later, a more cynical woman might point out how this innocent moment was something I’d just use for my writing. It is hard to defend against a woman’s cynicism, so I recommend not doing it. Simply feel the ache of it and move on.

But if you’ve got a connection with her, as we discussed on the call, you choose your moment to call her to a higher standard. As lovers, our major fight is the battle of innocence versus cynicism—the happiness of your relationship is dependent upon it, and it’s a battle we have to fight. I don’t know a long-term relationship that never had a stain of cynicism.

What was Your Take-away from the Studio?

I am curious to know, so reach out and share it on one of the platforms.

For me, Film Night reminded me of presence, and the quality of awareness true presence entails.

How well do you perceive the subtle things, the way she licks and bites her lip, the way erotic energy shapes her body and compensates for all the tension? Do you notice the symbols that surround your first encounter—the red-flags and motifs that’ll show up down the road? Do you see these things, real-time, as they happen? Mastery in the arts of seduction and romance means perceiving such things, feeling them, and allowing these subtle signals and inputs to shape your next step in the dance. You follow nature’s lead, and guide her in the next step, in-turn. Awareness of it all changes your decision-making, moment-to-moment.

There are clearly a number of ‘dual-skills’ needed in seduction. Can you witness what’s happening with the woman before you, while expressing yourself at the same time? When you tell a story, do you not lose yourself in the telling, but see the impact it has on her as you speak it? Think of Prem: always with a good question to ask. But is he aware of how he affects the space when he asks it, or can he learn to ask his question, while simultaneously feeling his impact on the room?

Always be feeling the room.

As animals, we pick up on the quality of connection instinctively. On an embodied level, hormones fire off, change our blood balance, the colour of our skin, the dilation of pupils, the production of semen. Dancing in the moment, sub-communication, includes and protrudes from the most microscopic undulations. If there was no such thing as the ego, working as it does to protect us, we would instantly act on what felt true: our body would guide us all the way. Primality, from the word prime or primary, means action taken from the basis of direct experience, before the secondary filters of the mind (and its adapted behavioural patterns) cloud through.

If you want full self-expression, what you need is to be loose enough, ego-relaxed enough, that your instinctual knowing can lead you through. This is why the right amount of alcohol is so useful—it doesn’t yet slow your perception, but it sure as hell breaks the ego’s shutdown of your more instinctive leadership and knowledge.

Perhaps you wonder: is it possible to express yourself freely, with heightened—awakened—perception, in the cold, sober light of day? Even amidst tricky dynamics like a vibrant dinner party, or a woman challenging you with contradictory and unruly energy? Can you feel the ripples of what she says to you coarse through your animal body as she speaks… or do you tend to realise your triggers—and your ‘perfect’ witty retort(!)—only later, long after the moment passed?

It is possible to become more spontaneous, and to close the gap between instinct and action. I can show you how.

One of my favourite aspects of the Before Trilogy, as we discussed, is seeing the power of a truly-spoken sentence from the heart. I shared the story of that Colorado afternoon, and I’ve sent other one-line arrows that penetrated a woman’s last defences and plunged into her heart, changing, it somehow seemed, her DNA. When Céline plays guitar for Jesse (and when she sings that last line about death), it’s so raw that it seems a spell is cast by her singing. There was never any going back, after such truth had been committed, and Jesse never took his flight home. I’ve received words, too, sentences women spoke to me—affection that mutilated my saboteurs and crept right in—and changed everything I thought I knew about love. A woman’s revelation of love to my heart… the peach-tone softness that shades her face as she speaks it… took down any sense of unworthiness I felt around receiving love.

Sometimes, these deep, transformative sentences creep into our bodies before we can react, and the conversation moves onto its next vital moment. Sometimes, such self-expression flies so quickly past that we know, somewhere, we fell in love—we just can’t pin-point the moment it happened.

Would you like to both sharpen, and feel, those arrow-like sentences that change couple’s fates?

How about learning sub-communication to the extent that you witness all her (and your own) primal responses, in lucid, high-def clarity, and get the freedom to act on instinct, by-passing the thought-loops of your brain?

These are subtle skill-sets that you can hone: by mastering presence, embodiment, and the ‘dual-skills’ of awareness and self-expression. Plus, of course, adding a good dash of theatre and play.

If you resonate strongly with my teaching style and my insights, why not join me for a once-in-a-lifetime year of mentoring? If you are the right man at the right time, I will guide you into possessing this entire, unique relationship skill-set, for yourself.

Have a look through Mastery, and request your application today.

I hope to see you inside,