Release & Breathe: Why The Subtle Aspects of Dance Cut Deeper 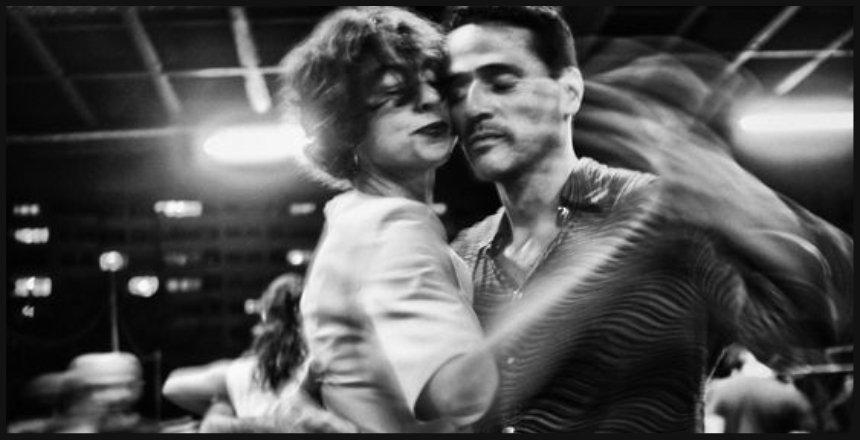 Kizomba, fire of my night, beat of my loins. My grin, my goal. Ki-zom-ba: the hiss of a cat growling down through the hips like a python, ending in the sleek pop of sex. Ki. Zom. Ba.

So last night I went out dancing. First time in ages that I did. And my first time shuffling accompanied to these slow, cascading steps.

To be fair with you, it wasn’t exactly my first dance class ever. I lived a few years in South America, and, let’s just say, I did enter a nightclub more than once.

But I never mastered a dance. I’ve never been particularly good at anything movement-wise. I was the weak link on the football team, and in rugby, I’d only dive for tackles when the runner had already surged past. I did have a couple of those shared “bliss state” experiences, you know, where you and the woman just get transported to another dimension, for the chemistry that arises between you in the dance. I guess they call this ‘flow’.

Over the past few years, however, I have been, in secret, loading up my body with a warchest of somatic practices. Practices to ground, to sensitise, to relax, release, to breathe, and attune, energetically, and find presence, stillness, and peace. I’ve been calibrating my ‘instrument of perception’, so to speak.

Outwardly I’m not so much, though, I have to confess. I carry a few extra pounds and, from time to time, suffer a little eczema, especially in these cold, wet climates where we sleep beneath the rays of indoor heating. Even now I’ve a little rash hiding in the divots of my nose. But don’t let the paintwork fool you. Beneath it all hums a highly-tuned tantric love-making chassis. And I’ve been revving to take it for a spin.

So I hit up the local kizomba class hoping for transcendence, but, as I traipsed  rainy Central London at rush hour I’ll admit, my expectations were exceedingly low. Low expectations for the quality of the class. And certainly low expectations for my own performance. At least at the beginning.

But, standing at the periphery during the second hour, I had to laugh. There were only a couple more men than women in the group, yet six or seven rounds went by and I only had a single practice—and that was with the teacher, who embraced me, surely, not out of primal yearning, nor even of professorial duty, but of embarrassment and pity.

Did I forget to shower or use deoderant before I came out? I wondered. Did I smear that ham sandwich I ate on the tube all over my face? Then I wondered if my skin condition beamed in the ultraviolet like some luminescent thrush, and that no woman, sound of mind or sound of sight, would come close to me at all.

But as we crashed and thumped into the final hour of class, something amazing started to happen. The steps came together and the rhythm and the movement sped up. The number of partners I embraced with increased and increased.

When the fifth consecutive woman complimented me on being either really good, or the best man in the class, my face blew red with embarrassment. Surely not! You’re just being charming! But I found myself in a flow-state, nailing the steps, the energy, the humour, the attunement, switching partners two or three times per minute, never out-of-touch from the musicality. I imagined we rode the kind of conscious surrender that every dance-loving woman yearns to feel herself taken by… yet only occasionally does.

So as we swept to the end of it all I found myself struck by how good the class was, and just how good it all felt. But, becoming honest with myself, there was no mystery in the whole affair: I knew I entered that movement class, pre-loaded with powerful talents, that make the whole art of embracing a woman a blissful affair.

As we wound down for the night, I asked a couple of the women how they felt in my embrace, wondering if the same assumptions I was coming to about my quality of movement also felt true for them. Yes… They concurred.

Now before telling you how the night ended, if you’re curious, I can let you in on the three “extra” things I consciously added during the dance class, that had us enter these fluid states of connection.

Sure, while any dancer reading along might like this—or else recognise much of what I’m about to write—the following skills are tried-and-true practices you can translate into all aspects of your life: romantic, sexual, or otherwise. Read on…

While dancing, I was constantly feeling the sensations in my own body. Any time I felt tension or contraction in any of my muscles (including the pelvic floor), I’d let it go… I’d relax. Often, when learning a new physical movement—a new neuro-muscular pattern, as it were—the tendency is to contract, to clamp up the body as a kind of stress response. And so part of my dance practice was to continue scanning my body, letting go of muscular contractions as soon as I became aware of them.

For instance, when the gorgeous twenty year-old Ukrainian girl comes into my arms, I notice the tendency of my whole body to tighten up and contract (cos’ she’s a smokeshow, right?), but instead, I can smile at my reaction and loosen up immediately, smiling into her eyes as I take her, relaxedly, by the hand.

Most men can’t do this. The ways men clasp their musculature happens well outside of their awareness—particularly when learning new dance steps, and particularly before an attractive girl! Awareness is curative, though. As soon as I spotted any physical tension, I’d let it go.

In dancing, you don’t want to grip her like a vice, or be anaemic like a floppy handshake, because women themselves will tense up with you from the start. At the end of the class, when I asked the women how my ‘hold’ felt, each of them said they could feel gripping, cage-like tension in the shoulders, back and arms of pretty much every other guy in the room.

One thing I’ve been playing with for a while is breathing in and through different parts of my body. When it builds up, this kind of breath-infused meditation can be stronger than an espresso, and draw you in psychotropic states of mind.

But conscious breath can be more subtle. In kizomba, the mechanics of the dance include a continual touching of the thighs, a caress of your thigh against the thigh of your partner, an infusion that becomes extremely delicate as you feel yourself become aroused. And just like you might revel in the fragrance of her perfume as it seeps into your nose, you can intend for your thigh to feel, caress, and taste every centimeter of hers. You don’t do this as some abstract meditation where your inner dialogue keeps ticking, oh, I can feel her thigh touch my thigh! No, you let all voices go and you feel the pristine intimacy of your thigh, upon a stranger’s unknown thigh, as a direct embodied experience.

Thigh, crotch, heart, gut; you feel and you breathe the the primary, primal experience of touch and sensation… its liquid… long before the secondary experience of your mind’s interpretation kicks in.

Such is the power of breath and touch…

3. Search For The ‘Meeting Point’

Perhaps this is the most abstract, but between any two humans, when we connect, there is an energetic meeting point (or a lack thereof). The ‘meeting point’ is where your energy, and her energy, come together, and create something new. A ‘third entity’ is created, you might even say. But hopefully, if you truly pay attention to it, something gets co-created when you come close to a woman, something unique, something authentic. Something energetically not vacant nor dead nor sterile, but something mutually intriguing—art—souls alive in the midst of it all.

In the past, I think my male brain, when engaged in the task of dancing, would lead by trying to get all the steps ‘right’, expecting her to follow what was going on in my world. Sometimes I’d judge her for not knowing what she should be doing.

I’d also experienced contorting myself, trying to fit myself into being the kind of leader I thought would be appropriate for her world… making her the leader, cueing off what-I-thought-she-might-like, without offering character of my own. As in dance, so in life…

But last night I strove to find the ‘meeting point’ between the women I danced with and myself. I felt into the shape and the rhythm of each woman, adjusting myself to fit the energy they each brought me… but, importantly, without sacrificing how I actually wanted to dance in the moment—without sacrificing my own desire to dance, borne from my connection to them and to the currents of the music—and I invited the women into that relationship, too.

Each dance I had last night was entirely different from the next. An adventure every time, and neither of us would know where we would end. I felt I could bring humour to the dance because it became less about the steps and more about the feeling of me and her. I started to express how I was feeling through my movement, and in return I got a physical impression of who she was as a woman, you know, the feel of her, her deep traits, in a way that words would never convey.

Well, I’ll tell you. I’m itching to get out there again. Dancing like this, with these gorgeous women, felt like love-making at its finest, and I’m sure I’ll be back, growling my hips, full of breath, for more. How did the night end? Let’s just say I left the building with three of the women… including the twenty year-old Ukrainian.

Post-script. A mere seven or eight months later I was to meet my now long-term girlfriend, herself a professional dancer, over lunch in Chiang Mai. I invited her (and a few others) out that night to, guess what, kizomba. That first dance we shared convinced her, that I was indeed her man.

Are You Aware of the Connection When You Dance?

Can you experience connection magic, even when you’re a beginner? Or have you hit some practice plateau?

Whether you’re a dancer, or you want to relate more intimately with women, there are entirely new universes to explore.

When you ‘install’ a few awareness-based skills to your body in private, when you apply yourself to the real-world challenges of embodiment or relating, guess what?  You now possess a reservoir of awareness and hidden secret options—things that make you stand out from the pack. When you install a deeper state of awareness in your body, you start seeing how just one little micro-adjustment you make, here or there, can hold the difference between opening her, going deeper with her, multiplying those orgasms together… or not.

Every secret, inner tool you need, to make your embodied life a transcendental experience, is included in this programme. Join me today!